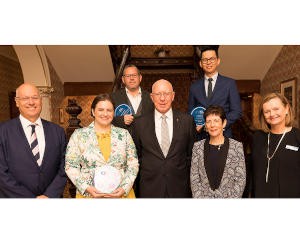 Macular Disease Foundation Australia (MDFA) has awarded a further $600,000 to three leading researchers in a prestigious event held at Admiralty House, the Governor-General of Australia's residence in Sydney, 10 October, on World Sight Day.

The successful recipients of MDFA’s Research Grants Program, which aims to reduce the incidence and impact of macular disease, were announced by His Excellency the Honourable David Hurley, Governor-General of Australia.

Macular disease is the country's leading cause of blindness and severe vision loss, affecting over 1.7 million people. MDFA has committed $4.2 million to cutting-edge research since the program's launch in 2011.

"We are excited to be investing in three very different and equally important projects - all of which are making valuable contributions to tackling macular disease," said the MDFA’s CEO, Dee Hopkins. "This year one of our researchers is focusing on diabetic retinopathy (DR) and diabetic macular edema (DME) in Aboriginal and Torres Strait Islander communities.  Diabetes-related vision loss is around five times higher among Indigenous Australians, so it's vital that we investigate the science, impact and mitigation of inequity and disadvantage."

Grants were also awarded to research investigating the potential for scar-less wound healing in age-related macular degeneration (AMD) patients, and new methods for improving detection and monitoring of the disease using optical coherence tomography (OCT). Program applicants are subjected to a rigorous evaluation process based on that of the National Health and Medical Research Council (NHMRC), as well as international peer review.

MDFA is the national peak body for macular disease. It is a not-for-profit organisation that promotes awareness, provides education and support services, and conducts and supports research, in addition to advocating in the best interests of patients, their families and carers. MDFA is a leading funder of research into macular disease. Since establishing its grants program in 2011, MDFA has committed $4.2 million to 18 Australian researchers and 21 projects.