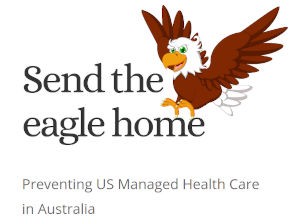 An ACCC draft recommendation allows for 40 per cent of the Australian marketplace to be consumed by this joint venture, which will force other insurers to respond. Insurers can minimise payouts by organising discount health packages through bundling the doctor, hospital and treatment plan which they contract together based on minimal costs.

Managed care is very profitable for health insurers but can be disastrous for patients as experience in the US shows. Dr Sumich said, “Health insurers want the doctor controlled by a contract so cost savings can be made on hospital admissions, cheaper treatments and cheaper prosthetic implants.

Under US managed care, the patient must accept whatever treatment the insurer contracts for them. The insurer calls the shots”. “Critics might suggest protesting doctors are just protecting their incomes, but ironically doctors can be paid more to take these contracts as long as they adhere to the insurer’s contract requirements”.

“The ASO and other medical bodies will attempt to persuade the Federal Government to protect privately insured patients by strengthening the Health Act and introducing anti-managed care legislation,” he said. “Other countries have already successfully introduced such legislation as a deterrent to managed care.”